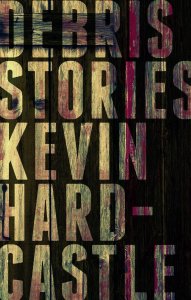 “[Debris] has flesh and bone, soul and brain. It’s a rare, rock-solid first book by … a dexterous writer with unflinching vision. This book’s gift is in constructing a museum of hard lives, letting us circle them like excavated marble statues, taking us close enough to see all their mutilation, power, and rough beauty.” – Alix Hawley, National Post

“…precise and evocative, immediately locating a reader in a milieu without recourse to wasted verbiage or overwrought description. Hardcastle has internalized the lessons of Elmore Leonard and Ernest Hemingway – writers who are frequently (and erroneously) praised for their fidelity to the rhythms of natural speech and dialect. In each case, what careless readers dismiss as naturalistic writing is in fact among the most highly stylized prose around. And the most difficult to pull off… Hardcastle’s prose, to his credit, never sounds like writing. Instead, the author manages to plumb the psychological depths of a group of marginal characters by way of a minimal style that rigorously strips away anything extraneous, leaving only what is essential… Hardcastle offers his readers completely immersive experiences.” – Steven W. Beattie, The Globe and Mail

“For a writer who seems to specialize in oversized gestures – bar fights, stabbings, shootings, vandalism, robberies, furious sex – Hardcastle’s greatest strength is the subtlety of his storytelling. The parsed obliqueness of the pieces in Debris, and the surface taciturnity of the characters, reads like a blend of Raymond Carver and Elmore Leonard. Thankfully, Hardcastle also captures the depth of both writers: dialogue gracefully loaded with subtext, glances rich in significance, the deceptively simple nature of the action. These are stories that demand close readings, with attention paid to every word, every gesture…

“Each story is a fully realized world—as rich as it is bleak, the characters powerfully and carefully drawn … Debris is a collection to savour.” – Quill & Quire, starred review

“[Debris] has its own strong voice… smoothly connected by uncompromising settings and Hardcastle’s authentic, plainspoken country-noir voice, the 11 stories collected here will appeal to fans of gritty, back-country crime fiction, even those who typically shun short stories.” – Booklist

“Unflinching…Debris is impressive for any writer, especially for a first collection…Hardcastle comes close to a masterpiece.”- The Winnipeg Free Press

“Debris is a tense and complex book, the prose fluent but unassuming, the narratives often surprising in their construction… plot points are but a small part of Hardcastle’s masterful technique. The violent potential of the situation, the evident yet unintelligible desperation of the cast of characters, the disadvantages of not knowing the lay of the land: without resorting to tired narrative cadences… offers all the pleasures of suspense fiction, in which every detail might equally be ominous or benign.” – Winnipeg Review

“The stories are told with careful precision, free of authorial judgment, in prose that reminded me of the understated lyricism of later Thomas McGuane or of David Adams Richards. As in McGuane or Richards, there are subtly redemptive qualities to the stories, but any redemption is hard-earned, and begins with a clear-eyed attention to the world that is… Debris is a very fine collection, well-crafted and compelling, in which every single story rings true.” – The Malahat Review

“With this impressive debut, Kevin Hardcastle takes readers into an inhospitable world that many of us will find unfamiliar and jarring. He writes in a thick country drawl, creating an original and highly effective voice for stories in which morality and survival are often at odds. It sometimes makes for an unsettling read. Cruelty and ugliness abound; no one gets off easy. But make no mistake, the Canadian literary scene needs Kevin Hardcastle and his brand of unsentimental realism. DEBRIS gets under your skin like few other recent works of fiction.” – The Fiddlehead

“Sparse and tightly controlled … Hardcastle is intent on showing us the polarity of life in small-town Canada, at once beautiful, dangerous and bizarre … Reviews of this book will no doubt allude to the ‘muscularity’ of the prose and liken Hardcastle to other writers in the country-noir tradition, but Debris earns its place as a book among books, deserving of even the most serious literary reader’s praise.” – PRISM International

“Hardcastle manages heart-pumping scenes without ever coming off as trite, and his characters are always firmly grounded in the familiar — a fact which makes the carnage lurking off-stage all the more unnerving. Debris offers a fresh perspective on a familiar genre, and can be recommended for this very reason.” – Broken Pencil

“Hardcastle is a strong storyteller with a real feel for vigorous vernacular and oblique dialogue… his characters are mostly the strong silent type, but they are distinct and individual, stuck in lives of seemingly endless struggle on the fringes of the city, or even the edge of civilization… Their stories describe a reality rarely encountered in today’s fiction, despite being so much a part of the way we live now.” – Good Reports

“There is much to like in Hardcastle‘s stories. He writes with a folksy intelligence reminiscent of John Steinbeck… Debris proves that Kevin Hardcastle is very a good writer… clearly a talent worth watching…” – New York Journal of Books