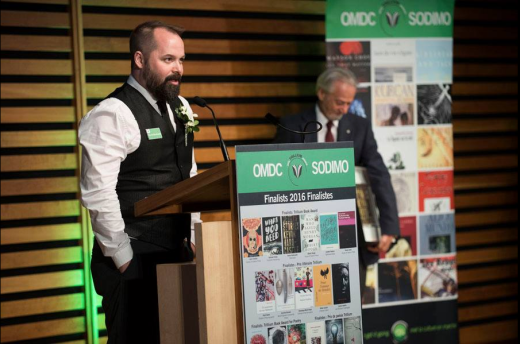 After an interesting week of going to three different awards ceremonies, something magical happened. Last Wednesday, I got to attend a fancy and very heartening evening put on by the OMDC. And at the end, my collection of stories, Debris, won the English Language Trillium Book Award.

I was lucky enough to have my editor John Metcalf there to receive the award with me, and got to thank him for finding my short story, Old Man Marchuk, a couple years ago, and calling me up to see if I had more. That led to this book, and will lead to my first published novel, In the Cage, due for publication in spring 2017. John changed my life with that call, and this book, as did my publisher, Biblioasis. This was their first Trillium finalist, and we managed to make it count. 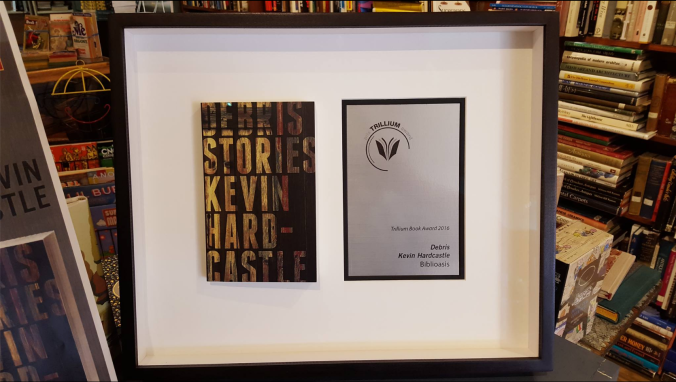 Massive thanks to the Trillium jury: Cordelia Strube, Steven W. Beattie, and Rob Winger. I figured it would always be a challenge to land three people who were in tune with my writing at the same time, but the planets aligned here. And I’m well aware how much that falls to chance. You are all heroes…

I had a lot of support in that room, and elsewhere, and I have to sincerely thank them all for that. I also got to hang out with fellow Trillium and Danuta Gleed Runner-Up, Andrew Forbes, who was up for both with his excellent short story collection, What You Need, from Invisible Publishing. We’ve known each other awhile, and sat and sweat together through those awards. That made the whole deal easier. As did sitting with some other friends, and a certain one to my left who was possibly far more pumped than any human has ever been when they called my name.

As I mentioned, me and Forbes also runnered-up to the Danuta Gleed Literary Award the Friday before. That prize went to Heather O’Neill, of Heather O’Neill fame. It seemed fitting that we both took that second place spot and had a drink during and after. Again, it’s a roll of the dice just to make those shortlists, and you need more than a little luck in the juries to get there, so I thank the folks of The Writers’ Union of Canada, and the excellent jury they put together. It was an honour to be in that company.

The other award event I was at took place the day before the Trillium, and that was the Kobo Emerging Writer Prize. The winner for the fiction shortlist was Irina Kovalyova, for her short story collection, Specimen. I didn’t expect to be up for this prize either, and I want to thank my friends who knew about and told me about submitting my book (which I did while hanging out in the Vancouver airport), and all the people at Kobo for giving us a fancy place to attend and drink drinks at for that evening. 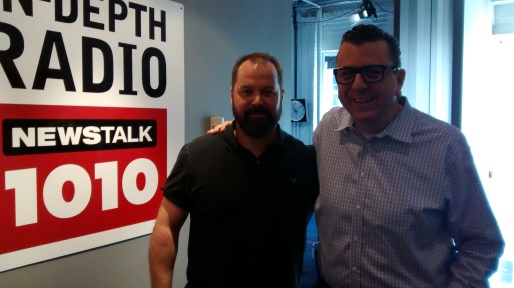 The other thing that happened, that I didn’t get a chance to talk about yet, was that I was on the radio with film critic Richard Crouse, on Newstalk 1010. I got waylaid by a subway fire that caused rush hour mayhem in downtown Toronto, but I made it in to talk about Debris and some other pop culture and media topics, as guests do on the show. I was on with Steve Michaels, who is the lead in Return to Grace, an acclaimed Elvis stage biopic, and with the venerable Canadian comedian, Simon Rakoff. If you’d like to check that show out, you can find it by clicking this link. My asshole late show-up bit starts at 21:27.

It’s been a hell of a week, and past few years, but I’ve got a lot of work to do yet. The novel edits will be finished soon, and that’ll all start up as far as production goes. In the meanwhile, I very much appreciate everyone who has read my work and has sent me messages and correspondences. I’m getting back to you all in some form or another, but know that they all meant a great deal to me. I am better for knowing all of you weirdos. Cheers.