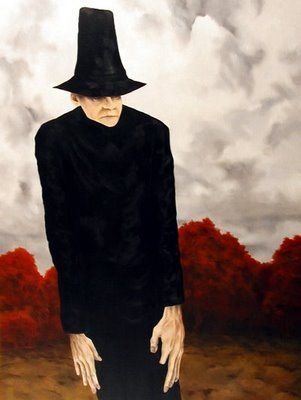 Earlier this month I learned that a new story of mine, called “Bandits,” has been accepted for publication in The Puritan, a very good online literary journal. So far this year I’ve gone two for two with online journals. As I mentioned in a previous post, my story, “We gotta save the leg,” was accepted by Little Fiction and will be published sometime this year. By the looks of it “Bandits“ is going to be out first.

So keep an eye out for The Puritan: Issue XXI, which is their Spring 2013 edition. “Bandits” is a story about a family of outlaws with a unique approach to robbery, held together by serious blood bonds . I heard it said that the editorial board likened it to “Northern Exposure meets Deadwood.” I’ll take that.

I have been doing a bunch of supplementary material for The Puritan, including a post for their blog, The Town Cryer. I also managed to record myself reading a five or six minute chunk of the story, which is something they are also putting out there. I can’t promise that something I recorded on Garage Band between beers and UFC fights is gonna be awesome, but it does exist. That is for sure.

I’ll post again when the supplementary stuff drops, and for sure when the story comes out. It is a longer story and I didn’t know if it would find a home. But I’m glad it did. I spent most of 2012 working on my second novel, which is now to be forever known as “Work,” right as it goes out for U.S. submissions, and I realized I didn’t have a story out last year to qualify for another run at the Journey Prize, or any other such thing. Now I know for sure that I’ll have at least two stories out there in 2013. These online journals are quick to the punch and they are gaining clout everyday, so hopefully we’ll be able to get a bunch of eyeballs on this work. Last year, The Puritan had one of their authors, Nancy Jo Cullen, chosen for the Journey Prize Anthology, for her story “Ashes.” Another excellent online journal, Joyland, had fellow finalist Andrew Hood in there for his story “I’m Sorry and Thank you” (though Hood had two stories in there, that fucking jerk, with “Manning” chosen as a finalist for the prize). So, that is proof enough of the quality and reach of the new breed of online lit mag, and I’m very proud to have had work chosen by such excellent journals.

As far as other things I did on the internet, and whatnot, I was interviewed by Will Johnson, a writer and serious champion of other good writers. Will has a site called Literary Goon in which he interviews many of the authors he has met on his travels, and where he ponders the mysteries of life, and also budgies. He set me up hard to come off like a surly asshole and I took the bait. I regret nothing….

Click on this line for the link to that interview on Literary Goon.

I also wrote a post for Little Fiction and their ongoing Short Story Month stuff, where they asked a bunch of writers about short stories, and posted those answers for the earth to see. You can click this link to read what I wrote about short stories: Why I dig them, who I dig the most, why the form is so important, and whatnot. Or click the logo above.

I’ve been cranking new stories out all year, and I think some of them are pretty good. If any others get picked up I’ll let you know, and I’ll post info about these upcoming publications when I get it. In the meantime, I’ve got the novel, “Work,” being sent out to a bunch of publishers throughout the US. Not a one Canadian publisher has had the wherewithal to give me a shot on it, at least not yet, so perhaps I’ll be circumventing Canada entirely if it keeps up like this. It’s tough to burn two novels in your home country, especially when you’ve finally found an editor with the guts to work on it, just to see the book get shot down by their pub board. But hey, it ain’t over yet. I’m pretty much willing to work with anyone who has the testicular fortitude to work with me (literally or figuratively).

I even sent the novel to McSweeney’s, as they have an open submission system for novels. A couple years back I got a favourable response for some of my short stories from an editor there by the name of Jordan Bass, which was pretty sweet, and I’ve submitted the odd story every since. That would be a hell of a long shot for the book, as they probably read roughly four to five billion novels through this system each year. But hey, stupider things have happened for way less reason.

In the words of the sorely missed Cort McMeel, written after I first told him about my uphill battle selling a novel in Canada: “Its good that youre a little bit angry with the idiocy of the publishing world..get used to it, but let that foster and breed hard work and contempt: a happy writer is usually a bad one…”

Man, do I miss talking to that guy. He was the best guy you could ever hope to have with you in the trenches.

So, that’s all I got until I hear more about the upcoming stories. As always, thanks for reading, and thanks for all of your support, be it verbal, physical, financial, moral, or alcoholic…