A little while ago I wrote about my story “Hunted by coyotes,” coming out this January in The New Quarterly. I just finished the final edits on that sucker, with the editorial help of the very wise Pamela Mulloy, and it will be along shortly. I talked on that story at length in the last post, and the difficulties I had getting it done, but I am goddamned glad to see it show up anywhere, let alone a leading literary journal like TNQ. 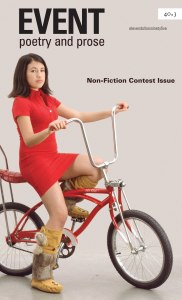 In mid-October I got word that another tale of prairie mayhem would be published by EVENT, another excellent journal out of Douglas College in BC. That story is called “Old Man Marchuk” and it involves an RCMP officer stuck in buttfuck nowhere Alberta, trying to diffuse a volatile situation amongst the locals, after the titular old man goes out a shoots a bunch of guys trying to rob him. It devolves into a sort of standoff between the outnumbered officers stationed there and the old man and his kin, who have blood ties that run deep in that country.

I guess it wont come as a shock to anybody who has read any of my work that this is stolen flat out from a real life thing that happened out there. By god I didn’t always love the prairies when I was stuck out in Edmonton, but I got some great material and learned some things I’d never have known about parts of this massive country and its many regional histories and particulars. This story should be out in the Winter or Spring issue of EVENT, depending where they ultimately decide to situate it.

That was a good deal as is, and then I got another acceptance on November 1st from these folks…

In the quickest turnaround I’ve ever got from a print journal, editor Jane Campbell at PRISM international got a hold of me to let me know that they were going to publish my story “One we could stand to lose” in Issue 52.2, scheduled to come out this February. The edits were finished up early this month. All in all, from submission to completing edits, the whole process took just over six weeks. That is pretty fucking incredible for a print journal, especially one as respected as PRISM. It blew my mind to get that one picked up so quick. I’d likely kill to get that kind of turnaround more often. But, hell, when you get a break like that you gotta take it and say thank you. So yeah, thank you to everyone at PRISM international who helped push that one through.

To give a brief rundown of it, “One we could stand to lose” is a story about an older fellow who clerks the desk of a historical hotel in his city that has gone to ruin slowly over the decades. The old man holds the place together with a kind of surrogate family in the younger staff and deals with the chaos and curiosities that come up in his day to day as he lives and works at the place. When it comes out I’m sure some folks will posit exactly what spot it was based on, but I’m supposing that there are a bunch of them out there with likewise stories and strange people who populate them. So cherish the ambiguity folks, and the use of the word shillelagh.

Otherwise, I’m still on the hunt for publisher for this latest goddamned novel, called “Work.” Trying to see if there is a US publisher willing to take the chance that Canadian houses wouldn’t. I’m also trying to get a collection done on this side of the border, and if any good comes outta that I’ll tell you all about it.

In the meantime, I gotta thank all the writers I’ve come across this past year for reaching out and letting me drink beer with them and say awful things. A bunch of us went down to the Writers’ Trust Awards this week, where we watched Naben Ruthnum take it to the house and win the 25th annual Journey Prize for his story “Cinema Rex.” There were a lot of talented writers in that room, and all the free wine and beer you could pour down your gullet. From someone who didn’t really have any experience with that community just a year ago, these developments are a pretty big deal, and also make it a hell of a lot easier when you gotta fight off the black dog. Anyway, I’m out, but I’ll leave you with evidence that I know people who write things. So long for now. 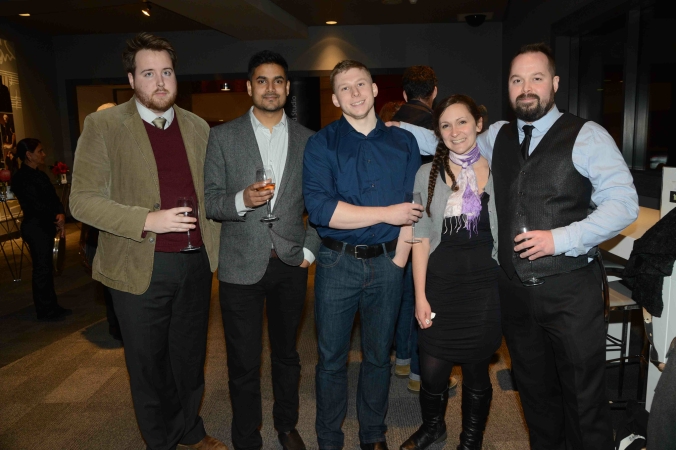