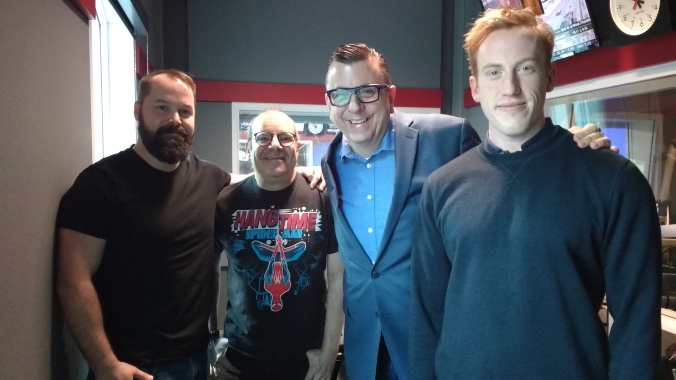 Last year I was invited to film critic Richard Crouse’s radio show, on Newstalk 1010, where guests show up to talk about their latest projects, and about various pop-culture topics. That was during the time that Debris was up for the Trillium Book Award, the Danuta Gleed Literary Award, and the Kobo Emerging Writer Prize. Due to the subway being ON FIRE, I was late to the show, but Richard was still kind enough to talk about the book and writing with me.

After going to a launch for Richard’s line of socks (he fuckin’ loves socks), Richard asked me to fill a chair for this week’s show, and I got up at the absurd time of before-8am to make sure I was early and nothing was on fire. I was on with comedian Simon Rakoff (who was there last time, coincidentally), and actor Kyle Gatehouse, and we talked about all kinds of things, like the moving Tribe Called Quest and Busta Rhymes performance and statement at the Grammys (PRESIDENT AGENT ORANGE!!), the recent SNL spoofs of the current US administration, and James Cameron’s whining about the Oscars. It was a good time, and, as Simon said after, it had a really good flow to the whole discussion.

We also talked at length about my new novel, In the Cage, which will be published September 12th by Biblioasis. So you can hear more about it directly.

The show should be airing tonight (Saturday, February 18th) at 9pm. You can stream it online, or listen on the actual radio if you like.

I’ll post the link after as well, so that people can find the show when it’s catalogued on Richard’s soundcloud page. Hang tight for that…

That’s it today. Happy Saturday. It is 11 degrees outside so I am going to get up out of this hobbit hole for awhile. Peace out. KH