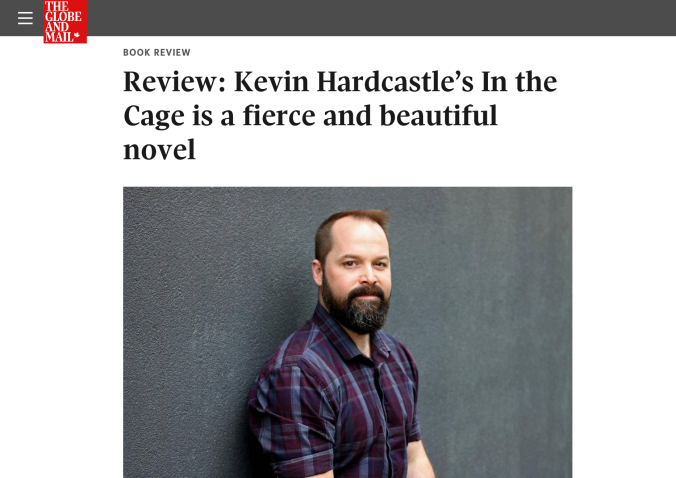 If you managed to grab the Saturday edition of The Globe and Mail, you might have seen this guy with the beard and a review of his book, In the Cage (now in stores), in the arts section. If you want to check it out, you can click here and read it online. It was a solid take on the book from author J.R. McConvey, and I have him to thank for quotes like the following (also thanks to Mark Medley for assigning the book):

“Hardcastle’s sentences are clean and hard, but the combinations are complex and deliberately crafted. Imagine the slow wrapping of a fist, knuckle by knuckle, and you get a sense of how Hardcastle tightens his narrative with a precision physics that’s grim, hypnotic, sometimes heartbreaking, always humane…

“Whether you like a fight or not, chances are, something in this novel will move you. In the Cage is a fierce, beautiful book.”

There was also a fine review of the novel in The Toronto Star on Saturday, written by novelist James Grainger. I liked his mentioning that the novel subverts some of the rote CanLit tropes we all have to deal with every book season, but didn’t agree on his ideas about how a fighter, and a man capable of violence outside of the cage, would inevitably have that bleed too far over into his personal life so as to more plainly damage his family and his relationship with his daughter, especially. It is a funny thing that has happened to me more than once in my career, being told some behaviour is implausible for poor, marginalized, or perhaps even violent people, but there is much evidence that there are multitudes contained within even the poor, even the criminally involved, and I wrote the story the way it was as a reaction to that.

Previously, some years back, this book was rejected by a big publishing house because they said poor people would have more familial conflict as a result of poverty, when my experience, being a poor person in a more or less loving and caring family, was that the family was tightest and least likely to get after each other when they were facing down real, serious exterior threats together. I also wonder, in Grainger’s reading, if being a “fighter” is equated with being “violent.” I talk about this in a few interviews this fall, but I think it is important to note, for someone who has trained, and experienced physical violence in the street, that I don’t consider an MMA fighter to be a barbarian or a participant in a violent act. It is a sport, and they are athletes. I would not assume a hockey player is the same person off the ice as they are on it, and nor should people assume the same of an Mixed Martial Artist. Daniel, of course, is not just fighting in the cage, but his extracurriculars do not come from any bloodthirsty desires. He starts small to try and make a buck and gets stuck in that world. And, the novel begins at a period when it has become truly violent, and that makes him determined to get out.

To be fair though, I did know that this reading was likely by some, and it doesn’t really hamper Grainger’s review or enjoyment of the book overall. He calls it a minor quibble, and those are part of the job. It’s also well within a reader’s rights to read a story differently that you intended, and I did get very nice lines out of the review, like this…

“Hardcastle tells this saga of lowered expectations in short, action-based (and often dialogue-heavy) scenes that forgo the internalized monologues, commentary and descriptive passages so prevalent in contemporary CanLit. The effect is to firmly anchor the action in a culture and an economy that negates the inner life and the ability to reflect upon and change the course of one’s actions. It also bestows upon the novel’s many fights, staged and spontaneous, and scenes of violence a thrilling immediacy.

“This is not to say that Hardcastle’s style is invisible. When the action demands, he successfully relocates the rolling, Biblical sentences pioneered by Hemingway, Faulkner and McCarthy to his small-town Ontario milieu, and the dialogue is as punchy as Elmore Leonard’s, though deliberately less comic.”

Not too shabby at all.  So, a pretty good little Saturday again, and I thank both reviewers for their time and words. Thanks to the editors at both papers too, the aforementioned Mark Medley, and the very kind Deb Dundas at The Star.